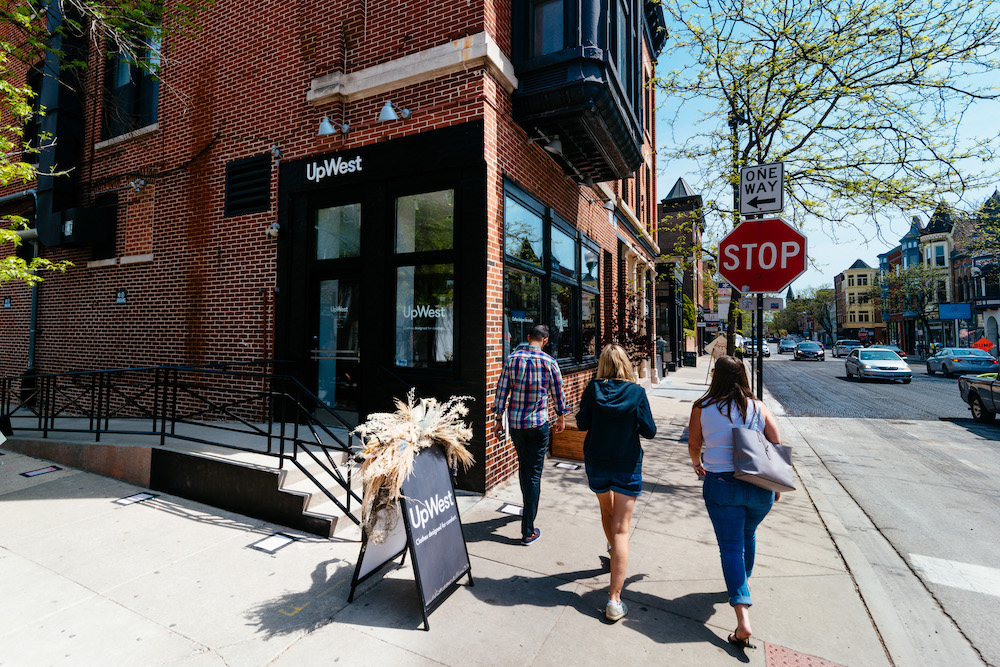 Chicago isn’t like any other city in the United States, or in the world for that matter. Historically one of the fastest-growing cities in history and an American hub of industry and culture, Chicago remains packed with incredible job opportunities, high-income residents, and eager tourists that make it an essential market for high-growth brands.

Host to world-renowned basketball and baseball teams, dozens of unique neighborhoods, top-ranking universities, and a burgeoning tech scene (one of Leap’s HQs is downtown), Chicago is much more than the US’s “Second City”.

This shouldn’t come as any surprise for those in the know. It’s the third biggest city in the country, with almost 2.8 million residents in the city limits and bustling suburbs surrounding like Oak Brook and Naperville. Chicago is home to over 400 major corporate headquarters and 30 Fortune 500 companies, with leading retailers like Lululemon, Nike, and Apple all having multiple locations throughout the Chicagoland area.

A dynamic and diverse city with a rich history bursting with beautiful architecture, fine-dining destinations, and tourist hotspots—Chicago is a cornerstone for retail. It’s a true destination all year-round, with a tourism market that doesn’t slow down, and is full of high-value shoppers.

Summer is a key season in the Midwest market—it’s when the weather is its most comfortable, and shoppers are out on the streets. As the weather warms, you can really see why Chicago is the crown-jewel of the Great Lakes. Unlike other cities, summer is a high period rather than a low period, as tourists visit from all around the country to dine, shop, and enjoy the cool breeze off the lake.

The Chicago customer base is unique. They are discerning, practical—undaunted by luxury purchases but skeptical of hype. Because every neighborhood caters to different kinds of shoppers, there is an enormous amount of possibility for brands of all kinds to find their market.

Chicago by the Numbers

Lincoln Park is a young, fun, and vibrant part of the city with a tight-knit, neighborhood feel. With a high average income and dense network of restaurants and bars, it’s a perfect hub for retail. Fine dining is also on the menu, with Boka, Mon Ami Gabi, and world-famous Alinea all nearby, as well as deep dish mainstay Pequod’s Pizza. Catering to a varied base of wealthy local shoppers, all different kinds of brands can be successful throughout this neighborhood.

Occupancy Cost: $$$
With a series of smaller, free-standing storefronts, Lincoln Park holds a lot of value for brands that don’t need a huge amount of space.

Chicago’s Gold Coast lives up to its name—this neighborhood is undeniably the city’s destination for luxury and glamor. Its history is one of prestige and affluence, the same holds true today. Thousands of tourists stay every year at high-end locations like the Waldorf Astoria, the Four Seasons, the Viceroy, and the Drake, and with destination flagship retail locations nearby, there is no shortage of visitors with money to spend looking to shop.

Occupancy Cost: $$$
Given the large amount of foot traffic and high-profile neighbors, retail prices are some of the highest per square foot in the city.

Retail Snapshot: East Oak and North Rush are packed with high-end brands and designer boutiques—Versace, Hermés, Prada, Chanel, Loro Piana, and Dior all have storefronts here, with Saint Laurent and Gucci only a few blocks away. This high-end presence also attracts buzzy, high-quality, but more affordable brands including Faherty powered by Leap, The Real Real, Allsaints, Madewell, Lululemon, and Athleta.

Over the past decade, the West Loop has become Chicago’s dining destination—but it’s so much more. A relatively new neighborhood, the West Loop is where you can find many of Chicago’s biggest employers, from industry leaders like Google and McDonald’s, to tech innovators like Gogo Inflight Internet and Dyson. West Randolph and its cross streets are what is known as “Restaurant Row”, teeming with unmissable spots for cuisine of all kinds, including hotspots like Girl & the Goat, Au Cheval, Smyth, and the Loyalist. Effortlessly hip with a bit of grit, you can see why it’s quickly becoming one of the most sought-after sections of the city.

Customer Profile: Cool, unique, and edgy, the West Loop caters to a mix of locals, commuters, and tourists at a range of price points.

20 minutes north of the city and just west of Evanston you’ll find the Old Orchard Shopping center at the heart of Skokie, IL. An attractive outdoor mall with uniquely branded storefronts, strolling through Old Orchard feels more like being in a shopping district downtown than it does taking a trip to the outlets.

Customer Profile: Wealthy families and teenagers after school and on weekends.

Occupancy Cost: $$$
Old Orchard boasts attractive store spaces in a variety of sizes for brands of all kinds, and at prices that are slightly less than the city center.

Retail Snapshot: Old Orchard has a mix of modern brands as well as legacy big box retailers. Bloomingdales and Nordstrom sit at the center’s North and South sides, and you can find everything from furniture (Dormify powered by Leap and west elm) to homegoods and cookware (Sur La Table and Williams Sonoma), to jewelry (Rolex and Tiffany) and leading tech companies (Apple and Amazon) in between. Apparel runs the gamut from Brooks Brothers and LL Bean to Ann Taylor and Forever 21.

If you head west out of the city, you’ll find yourself in the suburb of Oak Brook, IL and Oakbrook Center mall in about 25 minutes. This is a modern, curated outdoor lifestyle center and just like Old Orchard, you’ll find retailers, dining, and entertainment in abundance.

Customer Profile: Attracting a similar crowd of wealthy suburbanites as Old Orchard, Oakbrook skews slightly older with an emphasis on those looking for high fashion without heading all the way into Chicago proper.

Occupancy Cost: $$$
A premier location and one of the largest shopping centers in the country, Oakbrook offers attractive spaces of all kinds to upscale brands.

Modern Brands Know They Need to Win in Chicago

Beautiful architecture, a rich history, award-winning dining, and world-class shopping—Chicago should be at the top any retailer’s list. With access to a massive market and an enormous amount of flexibility in where to open to find the right audience, Chicago has a lot to offer brands of any size or vertical. Interested in launching your next store in Chicago? Reach out to us here.